Binding of unlabeled molecules (“analyte“) passed in solution through a Biacore flow cell to molecules immobilized on the optical sensor chip surface (“ligand“) can be monitored in real time by generation of sensorgrams which allow  visualization of all phases of the molecular interaction: a) association (increasing RU, b) steady state equilibrium (constant RU) and c) dissociation (decreasing RU) after flow cell switch to buffer. After sensorgram recording the sensor chip surface can be regenerated, e.g. by lowering pH or increasing ionic strength, and thus will be available for a new binding experiment. 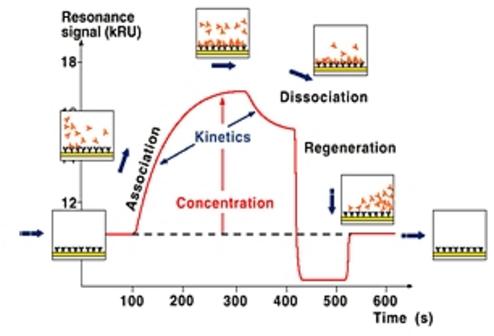 The surface plasmon resonance (SPR) phenomenon occurs when polarized light, under conditions of total internal reflection, strikes a gold layer at the interface between media of different refractive index: the glass of a sensor surface (high refractive index) and a buffer (low refractive index).

A wedge of polarized light directed under different incident angles towards the sensor surface generates an electric field, known as evanescent wave, when the light strikes the glass. This evanescent wave is absorbed by free electron clouds in the gold layer generating “plasmons”, electron charge density waves which cause intensity reduction of reflected light, wich is detected by the Biacore instrument.

The resonance angle of minimal reflected light intensity is a function of the refractive index of the solution close to the gold layer on the sensor surface. Refractive index changes, e.g. caused by binding of molecules to the sensor surface, result in a resonance angle shift which is recorded as “sensorgram response units (RU)“ by the Biacore instrument.